Musings of a Wandering Mind 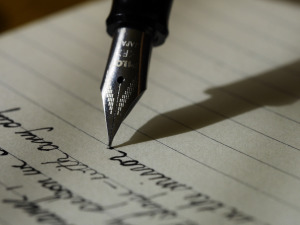 From as early as I can remember, writing was something that I would do to ease the stress of being a child. Of being the typical bullied, little boy who matured later than others of the same age. My brother, five-years my senior, unintentionally taught me to write stories. He would promote various stories, most of them being of the conspirator style – dam the government; dam the system; dam everyone else except himself. My brother was convinced that his shortcomings were not within his control, but rather in the control of a greater power…but not God. Religion was not on his menu.

I would watch him write with great passion and try to read the result of his time. Needless to say, I was less than impressed with the content. That didn’t diminish my respect for him, and it did feed a desire to move the various thoughts in my head into words. So, I too would spill words onto a page, hoping that there was a story worth reading.

Fast forward a few years, and there I am writing policy papers. Being trained how to effectively par down the verbal diarrhea into a single page that contained, (1) the issue, (2) the background, and finally (3) the recommendation(s). Taking a divisive topic and capturing these in a single page is quite the challenge. While I took to the challenge, I didn’t enjoy it. Mainly, because as one massages words to ‘fit’ and dehumanize the policy recommendation. Emotions and feelings tend to be the easiest to remove as they are subjective to the audience. Not everyone feels the same about everything. So, the job was to keep to the facts. And, while I do appreciate facts…as they are necessary, however including emotions or feelings can inspire others to empathize, sympathize and, in the end support the policy (aka – buy in).

I still crank out the occasional policy document, however I have focussed my writing time to poetry and short stories. The following poem was when I attended a funeral of a co-worker who died suddenly from cancer. There I was, sitting in a pop-up memorial service in a front room of a house, listening to the speakers and watching the family. It was a sad day. When the funeral service ended, I went to my car and started jotting down a quite simple poem that encompassed the day. The following was written on a napkin and sat in the console until I sold the car.

As I bid adieu to a friend

Her husband sat in blank expression

Her daughter read a verse aloud

The wake was well attended

Everyone has left for the day

Theme by Anders Noren — Up ↑